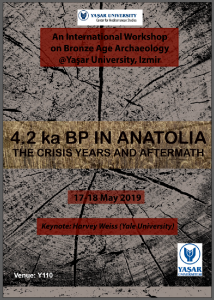 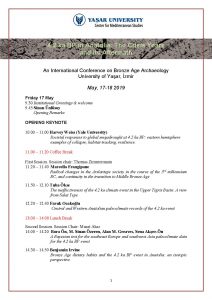 By 2500 BC Anatolian society witnessed a series of rapid transformations culminating into accelerated socio-economic complexity. Increasingly, however, new evidence suggests a distinct social crisis at around 2200 BC and afterwards which caused the disintegration of the established societal system in EBA Anatolia. This crisis manifests itself archaeologically as heavily burnt settlements followed by, in some cases, regional abandonment of sites. On the other hand, at sites where settlement continues, one observes a total change in the structuring of space, architectural forms and settlement layout. Such rapid transformations towards the end of the EBA are now a widely accepted phenomenon among archaeologists working in Anatolia. Moreover, synchronous crisis or so-called ‘collapses’ at ca. 2200 BC in adjacent regions such as in Mesopotamia in the east or Aegean region in the west suggest that the disruptions in Anatolia are indeed part of a global phenomenon which is related to the droughts caused by the 4.2 BP rapid climatic change.

The crisis years and its aftermath in Anatolia is exceptionally important to explore the unique development of Bronze Age societies in Anatolia. Therefore, during this conference, it was our focal aim to discuss archaeological data in conjunction with the paleoclimatic data on 4.2 BP event in Anatolia to infer its effects on the EBA society.